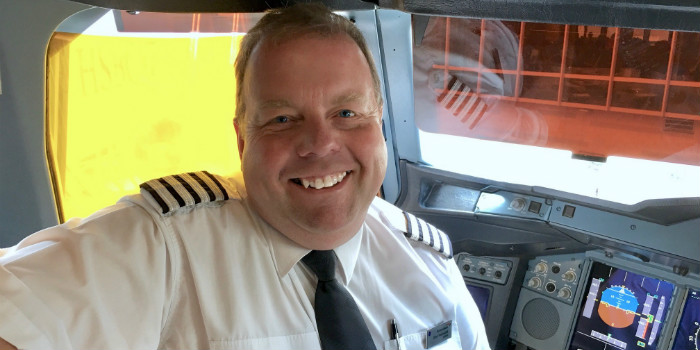 Different airport bases, different aircraft, different destinations. My 25 years with British Airways has been some journey and I’ve enjoyed every minute of it.

It was back in 1989. I was selected for British Airways’ Cadet Programme in Prestwick. However, a freeze of flying recruitment due to the Gulf War meant it was not until 1993 that I formally joined British Airways, flying the Boeing 737-200 from Manchester. That was a great place to start: an interesting mix of Captains to learn from and a real family atmosphere. I spent five years in Manchester and the next three at London Gatwick, where flying to night stop destinations meant I could explore European towns and cities. I’m a big fan of Italian food and wine.

Next stop was London Heathrow, a far bigger operation where I rarely flew with the same First Officer for more than a few days, but when we announced plans to buy two Airbus A318 aircraft to operate from London City Airport, it was back to a smaller base. The approach to the airport is very steep, the runway short and narrow, so landing was never boring! I now fly the A380, without doubt the most amazing aircraft. It weighs 560 tonnes at take-off, yet it’s the quietest and easiest aircraft I’ve flown.

If flying an aircraft isn’t the best job in the world, you certainly have the best office window!

The job requires dedication. The flying manual for the A380 alone runs to 7,000 pages and you have to be able to deal with any situation, day or night. But if flying an aircraft isn’t the best job in the world, you certainly have the best office window! As a Captain, I set the tone for a flight. I’ve been to places that I would never have visited on holiday and met some exceptional people. I still feel like a big kid every time I come into work! A Pilot First Officer who loves flying the A320 aircraft, being part of a team and making a difference to customers.... Read more